Phaneroptera falcata has arrived in Denmark 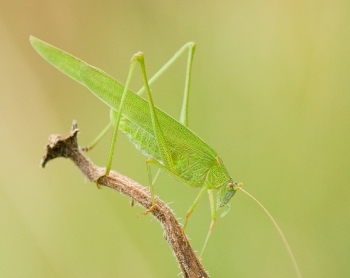 On August 6, 2010 a group of Danish entomologists (Simon Waagner, Erik Dylmer, Kent Olsen and Lars Iversen) visited the island Bornholm in the south of Denmark. During their fieldwork they were suprised by a female of Phaneroptera falcata , the first record for Denmark. An extensive search yielded no more specimens of this elegant bush-cricket.

Over the past decades P. falcata has shifted its range substantially to the north . Since the late 1980s many parts of Belgium, Germany and the Netherlands have been colonized. It will be interesting to see if the species manages to spread further north into Scandinavia.

Phaneroptera falcata is only the second grasshopper found new to Denmark within the last 35 years (not counting Chorthippus jutlandica , which was described from Denmark). The first was Sphingonotus caerulans which was found in 2005 at an abandoned railway area in southeastern Denmark.