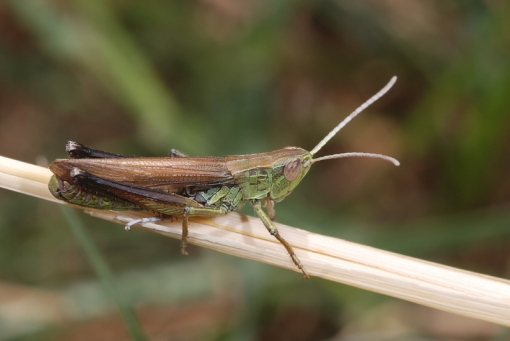 Varja Vedenina and the recently deceased Otto von Helversen have recently published a comprehensive study on the Chorthippus albomarginatus - group in Europe. They have included morphology and song characters in their studies. The courtship is especially relevant for species recognition in this group as the males have species specific displays.  Many species have white antennae, knees and tarsae which they use to signal to the female in a spectacular courtship.

The paper presents many interesting results. Chorthippus ferdinandi is described from Greece and the new subspecies C. oschei pusztaensis from the Balkans, Hungary, Moldova and Ukraine. Probably the most surprising insight is the placement of the recently described C. bruttius from southern Italy as a subspecies of C. karelini . The nominate subspecies is distributed in eastern Turkey, the southeast of Russia and Ukraine.

Source: Vedenina, V.Y. & O. von Helversen 2009. A re-examination of the taxonomy of the Chorthippus albomarginatus group in Europe on the basis of song and morphology (Orthoptera: Acrididae). Tijdschrift voor Entomologie 152: 65–97.