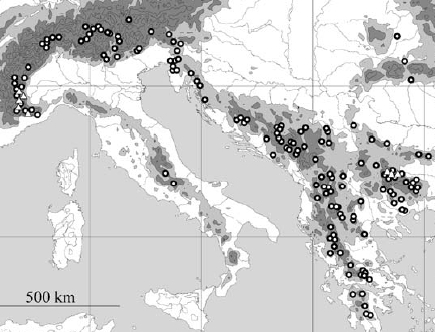 Dirk Berger and colleagues have published a paper on the remarkable distribution of Stenobothrus cotticus . This species was known from the southwestern Alps and was discovered recently in the Rila mountains in Bulgaria. In between the closely related S. rubicundulus occurs.

Genetic and morphological research proved the close affinity of both S. cotticus populations. The authors suggest that during the colder times S. cotticus had a much wider distribution in lower altitudes. In warmer periods the species dissappeared in many sites, leaving only the two now known localities.