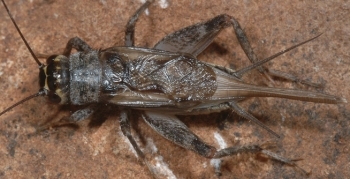 On August 19 Dutch entomologist Jaap Bouwman discovered a small population of Eumodicogryllus bordigalensis along a railway track in Ede, in the central part of the Netherlands. This is the first record for this country. The species has a southern distribution in Europa but in recent years it has been found more and more to the north, especially in Germany. The habitat is almost always along railroads. It seems probable that the crickets have been imported involuntarily into this site. It will be interesting to see if E. bordigalensis can survive the coming years or maybe even spread to other localities.