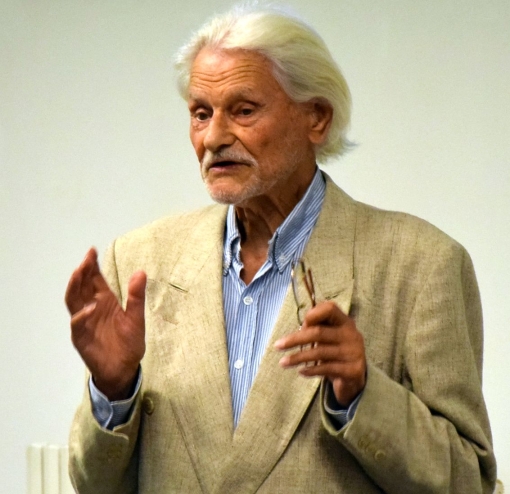 Dr. Barnabás Nagy, leading Hungarian orthopterist recently celebrated his 95th birthday. He was officially greeted in 16 September 2016 by the Hungarian Entomological Society, the Zoological Section of the Hungarian Biological Association, and the Hungarian Natural History Museum, where he is still working as a volunteer. On the occasion, Dr. Zoltán Korsós, General Director of the museum awarded him the medallion called Pro Studio et Fidei. Honouring the achievements of the 75 years (and counting) of his orthopterological career, connected with his birthday, the First Hungarian Orthopterists’ Meeting was held on 17 September 2016, in the Hungarian Natural History Museum, Budapest.

[[{"type":"media","view_mode":"media_original","fid":"277","attributes":{"alt":"","class":"media-image","height":"1435","width":"2834"}}]]From more than 30 participants, the majority were from Hungary, but some guests participated in the symposium from Serbia and Slovakia as well. The 14 lectures and 4 posters presented covered a wide variety of topics from local faunistical studies from the long-term changes of grasshopper assemblages in connection with land-use changes and the grasshopper diet of a venomous snake species to the possibilities of the education of young orthopterists in Hungary. The abstract book (in Hungarian) is available at orthoptera.nhmus.hu.